~Article as posted by The Star-Telegram

The handsome red or gray humpbacked cattle known as Brahman may look too exotic and unwieldy to withstand extreme conditions, but breeders say the huge animals are the wave of the future.

Stock Show visitors in the cattle barns Tuesday ooohed at the size of Brahman guys like Mr. Elijah Manso, a gray 2,500-pounder, and aaaahed at the tender sight of Lady H Alexis Manso nursing her 2-month-old bull calf.

Brahmans are superheroes at survival against heat, drought, humidity, insects and poor range conditions, and their traits are influencing cattle breeding in the 21st century.

Reyes’ ranch in Mexico is named Tres Mujeres in honor of his wife and two daughters.

The animals were bred and shown by Heritage Cattle Co. of Hungerford.

What makes a great bull like Elijah stand out in the show ring?

The last name Manso appears on Brahman cattle descended from a literal granddaddy of the Brahman breed, a gray bull named Manso who lived on the J.D. Hudgins ranch in Hungerford, near Houston.

The commercial cattle ranch was established in 1908 when J.D. Hudgins and his children began buying humpbacked Indian cattle from neighbors in an attempt to breed cattle tough enough for the challenges of the Gulf Coast environment.

By 1924, the American Brahman breed registry had been established. And in 1933, the Hudginses bought Manso, a “banana-horned” bull prized for his conformation, size and disposition. The first of Manso’s lifetime total of 316 calves was born in 1934, and the American Brahman Breeders Association estimates that 75 percent of cattle it registers today are from Manso’s line.

Manso died at age 17 in 1943. The latest Brahman buzzword is F1, Reyes and Navarro say.

The designation refers to cattle resulting from the trend of crossbreeding Brahmans with European and other breeds to create stronger, more adaptive animals.

Average visitors to the Brahman barn had more mundane questions for the breeders and owners, such as, “What’s the purpose of the hump, and what’s stored in there?”

Answer: meat.  “It’s just part of the breed, one of the distinctive things about them,” Reyes said. “They’re the most beautiful animals.” 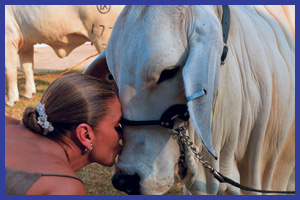